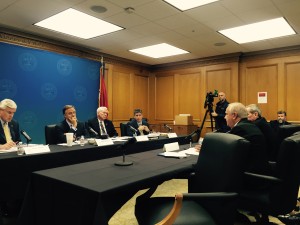 Governor Haslam held budget hearings for fiscal year 2015-16 with department heads in late November and early December 2014. Haslam requested earlier in 2014 that all Departments to plan for 7% budget cuts, but stated throughout the budget hearing process that he is hopeful cuts that large will not be necessary.

Below are brief department by department summaries of the FY2015-2016 budget hearings.

Presentations are listed in alphabetical order.

Reductions include abolishing the position of Assistant Director of Consumer Affairs, billing all administrative overhead to the divisions generating current services revenue or inter-departmental revenue, and changing the billing methodology to create reductions in the operational expenditures of the Fire Service and Codes Enforcement Academy.

TDOC recommended the closure of the Charles Bass Correctional Facility in Nashville, as well as abolishing 233 positions. Under this plan, TDOC states staff at Charles Bass can be transferred to other area prisons. Commissioner Schofield indicated that he is confident the department can place every employee affected by the closure of Charles Bass.

Additional reductions are found in the continued implementation of the department’s 28-Day Work Cycle and more accurate tracking of overtime pay for correctional officers. The Commissioner also stated that the department will be renegotiating current contracts in State Prosecutions as another way to save money.

The Commissioner also updated the Governor on a CCA prison in Trousdale County which is currently being built. The 2500+ bed facility is expected to be operational in early 2016 and the department plans to contract with the facility and add 2 state-funded positions to their roll.

Commissioner Jim Henry’s budget proposal responds to the ongoing concerns over child, staff, and public safety in and around the department’s Youth Development Centers (YDCs).

Henry’s proposed staff reductions amount to 90 positions (131 reductions, 41 additions) – it is unclear how many of those positions are currently vacant.

The Commissioner’s proposal includes $33 million to increase the staff-to-inmate-ratio from 16:1 to 12:1. The proposal also includes hiring additional therapists to work with the student residents of YDCs, increasing security measures, and the transfer of some teens from the YDCs to local residential facilities, which would take advantage of some available federal funding.

Commissioner Raquel Hatter’s budget proposal included a $9.6 million reduction in funds that currently support the administration of the SNAP program.

Hatter then moved to address the positions affected by last year’s administrative changes to the TennCare application process. The Commissioner proposes eliminating the 313 affected positions; of those, over 180 positions are either currently vacant or expected to be vacant in the next year due to upcoming retirements.

7% reduction proposal includes reductions of approximately $28 million. No state employee positions were targeted for reduction in the proposal.

Budget items include the addition of eight new positions: Park Ranger positions at Burgess Falls (2) and at South Cumberland Park (1), additional tech assistants in the Office of Energy Programs (2), and an equipment operator in the West Tennessee River Basin Authority (1).

The department introduced the closing of revenue-generating park operations as a reduction option as it did in FY14-15, although it was not taken to satisfy that budget. This reduction would affect 129 filled and 5 vacant positions.

7% reduction proposal includes a net reduction of 46 positions (adding 3 positions in the Edison division, and eliminating 49 positions, some within the OIR division). Department leadership stated that a number of these positions are currently vacant, but we do not yet know the number of vacant vs filled positions affected.

TDFI’s budget presentation was just a general department update for the Governor.

No reductions in positions. The budget proposal includes the addition of 6 positions to expand services in the Empower TN program, as well as Portfolio Management, Real Estate Compliance, and Business Relations divisions of DGS. Proposal includes reductions in the Books from Birth program and the restructuring of facility management services operational costs.

Commissioner John Dreyzehner’s proposal includes a request for $7.6 million in additional funding from the state, as well as adding 32 positions in response to Tennessee’s status as one of the bottom 10 unhealthiest states in the nation.

His plan reduces the budget by $9.8 million by replacing general fund state appropriations with available federal and other funds, third-party billing implementation and fees, reductions in contracts, eliminating the hemophilia and chronic renal disease program, reduction of operational costs.

No direct mention of reductions in the presentation.

7% reduction proposal includes a net reduction of 18 positions (adding 4 positions and eliminating 22, 19 of which are vacant).

Only 7 vacant positions currently in the department’s central office are to be eliminated under his plan.

Major General Max Haston presented the department’s budget, with no staff reductions proposed. All proposed reductions are to occur in administrative operational expenses, training, and supplies.

7% reduction proposal includes the elimination of 32 positions, 17 of which are currently vacant. The remaining 15 filled positions have been submitted as reductions in association with an audit in previous years as a savings measure.

No positions targeted for reduction. Commissioner Darrin Gordon proposed a number of reductions, largely in benefits and reimbursements, and grants.

Commissioner Schroer stated that TDOT is not reducing their budget by 7% as requested by the Governor because the department’s budget is already dedicated and allocated. According to Schroer, the department has reached its limit of what it can do without hiring more employees. He praised the department for its work developing existing employees in so doing preventing additional outside contracting. The Commissioner also praised TDOT employees for participating in the GED program where applicable and for continuing their education under the maintenance and engineering cross training program.

The Department of Tourism’s budget was presented by Commissioner Susan Whitaker, reflecting a reduction of $762,600 in marketing activities. Her proposal did not include a reduction of any positions