It is with great sadness that we announce Tom Spillman, former TSEA President, passed away over the weekend in Nashville.

Tom Spillman was the sixth President of the Tennessee State Employees Association, serving from 1990-1994.

Spillman joined the association in 1981. He worked for the Department of Health and Environment until he retired in 2008.

During his tenure as President, Spillman worked closely with Governor Ned McWherter and Executive Director Linda McCarty to bring to life a number of important benefits that state employees continue to enjoy to this day, such as the 25% tuition discount for state employees and their dependents at state colleges and universities, and establishing vesting rights in TCRS after 5 years of enrollment.

“Tom always did his best for the Association and today we are experiencing a great loss,” TSEA President Bryan Merritt said. “He was a fine man, and truly an asset to TSEA. Tom was a wealth of knowledge and always made state employees a priority. We ask that you please remember his family today.”

Before being elected president, Tom served in many leadership roles within TSEA including Middle Tennessee Vice President, TSEA Board member, Davidson County Board member, Chair of the Legislative Committee, and member of the Membership Committee. He was named Recruiter of the Year in 1989, and was a founding member of TEAM’s Capitol Club.

All services will be held at:
Judson Baptist Church
4900 Franklin Pike
Nashville, TN

In lieu of flowers the family is requesting donations be made to: 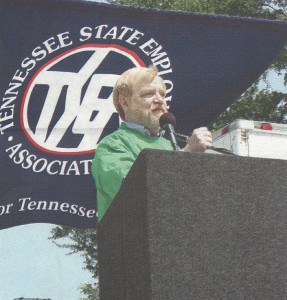