KNOXVILLE – State employees were able to spend quality time with their local legislators during TSEA’s Legislative Dinner on Thursday.

To begin the evening, TSEA Executive Director John Summers led a 45-minute pre-meeting for state employees covering lobbying “do’s and don’ts” and discussing, in detail, the association’s legislative agenda items. Afterward, as legislators arrived and sat with groups of their constituents, dinner was served. Members were able to spend valuable time with their local elected officials, building relationships and discussing state employee concerns.

The TSEA Legislative Dinner program provides opportunities for TSEA members to spend more time with their local legislators than is possible during a traditional lobby day on Capitol Hill. This Thursday, TSEA’s legislative dinner will be held in Memphis followed by dinners in Jackson, Nashville, Chattanooga, Cookeville and the Tri-Cities.

Dinners will be held throughout the state each Thursday through March. Click Here for more information, or to RSVP for a dinner in your area. 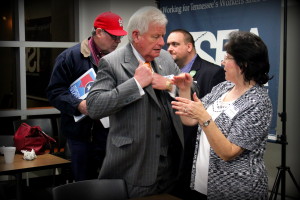