TSEA May 11, 2017 Comments Off on No Bids Received For Fall Creek Falls Outsourcing Proposal

The Times Free Press reported today that Gov. Haslam’s proposal to outsource at Fall Creek Falls state park received no bids.  This means state employees will continue to operate the facility!  This is a huge victory for state employees and all Tennesseans.

In late March, Haslam’s outsourcing plans for Fall Creek Falls got back on track when the State Building Commission amended the outsourcing RFP to tighten oversight over building-related aspects of the project. This change was to satisfy objections raised by Tennessee-based architects and engineers which had temporarily postponed the outsourcing effort.

During the last few months, TSEA and others testified at several hearings against outsourcing. TSEA supported attempts to file an amendment four different times in as many different committees which would have placed a one-year moratorium on outsourcing. We helped an effort to gather signatures from more than seventy legislators on a letter from Sen. Steven Dickerson asking Gov. Haslam to pause his outsourcing efforts so the legislature could better understand the plans. We issued numerous public statements, commented on countless articles, submitted several op-eds, held meetings with members of the administration, and more. 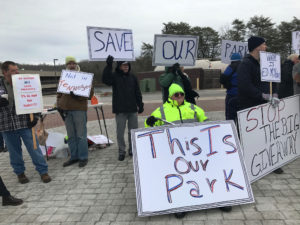 TSEA also worked with and supported Sen. Janice Bowling’s request for an Attorney General’s opinion on the legality of outsourcing at Fall Creek Falls, and we were the first to call for an economic impact statement for outsourcing plans at Tennessee’s state parks, higher education facilities, and other state buildings.

In early January, TSEA held a peaceful protest at Fall Creek Falls during the state’s site visit with potential concessionaires.

This is a developing story; please check back for more details.