Save the Date – 2021 Representative Assembly 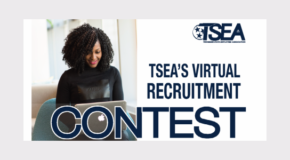 The Tennessee Department of Human Resources recently sent an email notifying state employees that the time allowance for voting rules has been expanded. The State of Tennessee Attendance and Leave Manual outlines […

TSEA October 15, 2020 Comments Off on Celebration of Life for Almous Wade Austin

Earlier this year we learned of the passing of former TSEA West Tennessee Vice President, Almous Austin, 85, who died on Sunday, March 29, 2020, at his residence in Newbern, [… TSEA’s 39th Representative Assembly met last weekend with a packed schedule. Having no association constitution or by-law proposals to discuss, attendees had the opportunity to attend the TSEA Board of […