The Tennessee General Assembly has passed the FY2021/2022 state budget, including funding for state employee performance raises, bonuses, benefit increases, and various salary adjustments. “It has been an incredibly challenging […

The importance of supporting our TEAM-PAC endorsed candidates

TSEA October 23, 2020 Comments Off on The importance of supporting our TEAM-PAC endorsed candidates

From the desk of TSEA Executive Director Randy Stamps There is less than one week remaining to vote during Early Voting. The final day of Early Voting is Thursday, October [… 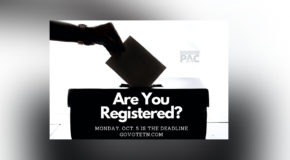 October 5 is the Voter Registration Deadline

TSEA September 15, 2020 Comments Off on October 5 is the Voter Registration Deadline

One of the most important things a state employee can do to protect their job and benefits is to vote for candidates who support state employees. But you have to be […

All but one – 99 percent – of TEAM-PAC’s endorsed candidates in the 2016 general election were elected to serve in Tennessee’s 110th General Assembly. This is great news for […