Want to Win a Trip? 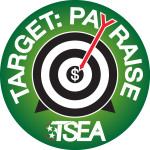 Over the weekend, TSEA launched Target: Pay Raise, a new membership campaign with a goal of adding 1,000 new members to the association by September 1.

During the association’s 40th annual Representative Assembly, TSEA’s Executive Director John Summers announced the new campaign. “We have a lot of things we want to accomplish for state employees including a pay raise, and that is why it is vital that we continue to strengthen this association. Adding 1,000 new members by September is a great first step,” Summers said.

In addition, all recruits* will be entered into the contest.

The deadline for entries into the contest is September 1, 2014. The campaign will culminate with a December drawing of two randomly selected grand prize winners out of two different pools of entries: One pool of recruiters, one pool of recruits.

The grand prizes are as follows:

SPECIAL JUNE BONUS INCENTIVE: For every new member* recruited during the month of June, recruiters will receive two entries into the contest!

Click here to learn more about the contest and to get started recruiting!

*To qualify for the contest, all recruits must be active state employees. Retirees can recruit to be eligible for the recruiter grand prize; however, retired recruits do not count as entries toward the contest.