TSEA is saddened to announce former TSEA President and longtime member Bob Henry passed away this morning at his home in Bolivar after a lengthy illness.

Bob worked for the Department of Mental Health at Western Mental Health Institute as the Director of Pastoral Services. He held degrees from DePaw University and Erskine Theological Seminary, and also served as President of the Regional Interfaith Association in Jackson, TN.

Bob Henry joined TSEA in 1978 and served as Forked Deer Chapter President for two years before successfully running for TSEA President in 1980. Over the 10 years he presided over TSEA as President, Henry worked with the TSEA Board and Staff to guide the association through its numerous battles with then-Governor Lamar Alexander. Under Henry, the association weathered Alexander’s attack on TSEA’s payroll deduction status, and later the association was able to establish the Access Law. Upon his retirement from the Board of Directors in June 1990, Henry was honored for his service to the State of Tennessee and Tennessee’s state employees by then-Governor Ned McWherter.

Henry’s guidance from 1980-1990 and his contributions to the foundation and continued success of TSEA are unparalleled. TSEA’s thoughts and prayers are with Bob Henry’s family at this time. 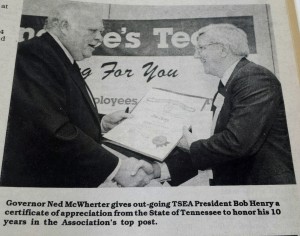